If your GE oven fan has stopped working, using the oven without it would be dangerous and result in more issues. So if you would like to know how to get your GE oven fan working again, keep reading.

GE Oven Fan Not Working — How To Fix

If your GE oven fan is not working, you will need to replace the motor. To replace the convection motor in a GE oven, follow the steps listed below…

Step 2: Open the oven door and remove all the racks.

Step 3: To make it easier to remove the fan, you can remove the door. Flip the hinge locks and lift the door off.

Step 4: Take out the four screws on the back wall of the oven interior. The screws secure the fan blade cover.

Step 5: Remove the fan blade cover and set it aside.

Step 6: Take out the nut in the middle of the fan blade by turning it clockwise using a nutdriver.

Step 7: Pull out the fan blade and the washer.

Step 8: Inspect the fan blade closely. If the hole in the fan blade is not round but D shaped, you will need to get a new fan as well as the motor.

Step 9: Turn the oven around and take out the screws which secure the back panel of the oven.

Step 10: Remove the back panel.

Step 11: Disconnect the wire harness of the convection motor.

Step 12: Take out the screws which hold the convection motor to the oven.

Step 14: Remove the felt cushion on the shaft of the convection motor.

Step 15: Get a new motor and transfer the felt cushion to it.

Step 16: Position the new motor on the oven and hold it in place using the three screws.

Step 17: Reconnect the wire harness to the convection motor.

Step 18: Reposition the back panel of the oven and hold it in place with the screws.

Step 19: Return the fan blade and slide the shaft back in place.

Step 20: Hold the fan blade in place using the nut.

Step 21: Return the fan blade cover and secure it using the four screws.

Step 22: If you removed your oven door, return it and flip the hinge locks to secure it.

Step 23: Return the racks to the oven.

Step 24: Close the door and plug the oven back in.

Also follow the steps above if your GE oven fan is making noise.

Watch the video below for a visual of how to replace a GE oven fan motor.

There are two possible reasons why your GE oven fan keeps running. Below, we have listed them and how to fix them.

The thermostat may also be the reason why your GE oven fan keeps running. Click here to learn how to replace the thermostat in a GE oven.

GE Oven Smell [How To Fix]

How To Replace A GE Oven Insulation [A Guide]

How To Use A GE Oven [Detailed Guide]

How To Replace A GE Oven Sensor [Quick Guide]

How To Replace A GE Oven Fan

To replace a GE oven fan, follow these steps…

Step 2: Open the door of the oven and slide out the racks.

Step 3: Take out the four screws on the back wall of the oven which secure the fan blade cover.

Step 5: Take out the nut which secures the fan.

Step 6: Remove the washer and fan.

Step 7: Get a new fan and slide it into place.

Step 8: Reposition the washer and hold the fan in place with the nut.

Step 9: Return the fan cover and the screws which secure it.

Step 10: Slide the racks back in the oven. 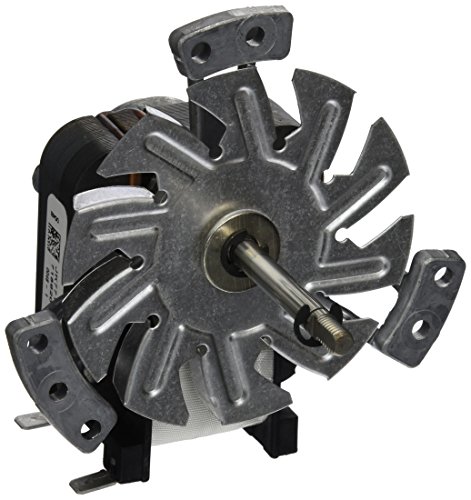 GE Oven Fan Turns On And Off

It’s normal for your GE oven fan to turn on and off during use. To maintain the temperature of the oven, this happens during the cycle.