Below, we have listed the possible reasons why your GE oven igniter is not working and show you what to do about them.

Step 1: First, unplug the oven or switch off the circuit breaker.

Step 2: Open the door of the oven and slide out the racks for easy access to the igniter.

Step 3: Using a flathead screwdriver, take out the two screws at the bottom of the oven interior. There will be one on each side.

Step 4: Slide your hands into the slots in the bottom panel.

Step 5: Lift the bottom panel up and push it backward to remove.

Step 6: Push out the oven’s bottom drawer a bit.

Step 7: Take out the screw which secures the shield of the of the oven igniter.

Step 9: Take out the screw which holds the gas valve cover in place.

Step 11: Carefully pull out the wire harness through the round opening at the back of the oven.

Step 12: Disconnect the wire connector once you have pulled it out.

Step 13: Now take out the screws which hold the igniter in place.

Step 14: Take out the igniter and get a new one.

Step 15: Screw the new igniter to the burner using the two screws and reconnect the wire connector.

Step 16: Push the wire connector back in the round hole.

Step 17: Reposition the valve cover and secure it with the screw.

Step 18: Also reposition the bigger igniter shield and hold it in place with the screw.

Step 20: Return the bottom panel of the oven.

Step 21: Hold the bottom panel in place with the two screws.

Step 22: Slide the racks back into the oven.

Step 24: Plug the oven back in or turn on the circuit breaker.

Also follow the steps above to replace your igniter if your GE oven igniter glows but doesn’t produce flame.

The video below will give you a visual of how to replace a GE oven igniter. 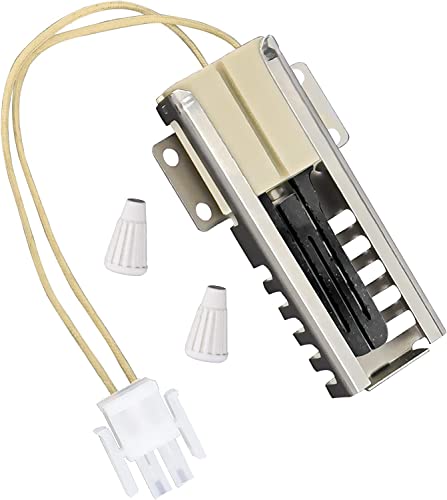 Step 2: Also make sure to shut off the gas supply.

Step 3: Open the oven door and take out the two racks.

Step 4: Next, use a flat blade screwdriver to unscrew the bottom panel in the oven. There are two screws.

Step 5: Lift the bottom panel out of the oven and set it aside.

Step 6: Pull the oven’s bottom drawer forward and unscrew the shield which covers the safety valve.

Step 7: Take out the screws which hold the burner tube in place. There is one at the front and one at the back.

Step 8: Lift the tube up and move it to the side.

Step 9: Disconnect the wires from the valve making sure to note where each one goes first.

Step 10: Unscrew the gas tube from the valve.

Step 11: Take out the screws holding the valve to the oven.

Step 12: Test the safety valve for continuity using a multimeter. If the multimeter doesn’t show a reading, the valve is faulty and should be replaced.

Step 13: Get a new valve and screw it to the oven.

Step 14: Screw the gas tube to the valve and reconnect the wires to the appropriate terminals.

Step 15: Reposition the burner tube and secure it with the two screws.

Step 16: Return the valve shield and secure with the screws.

Step 17: Push the bottom drawer back in.

Step 18: Reposition the bottom panel and hold it in place with the two screws.

Step 19: Return the racks to the oven and shut the door.

Step 20: Plug the oven back in and turn on the gas supply.

If the safety valve isn’t faulty, keep reading to learn the other possible reason why your GE oven igniter is not working.

The video below will show you how to replace the safety valve in an oven.

GE Stove Igniter Keeps Clicking When Off — How To Fix

Most times, this happens because there is moisture in the igniter. Get some paper towels and wipe the igniter. After wiping it, leave it out for a few hours to dry completely. If your GE oven igniter still clicks, there may be some debris of food in it. Get a toothbrush and carefully scrub the igniter with it.