If your GE oven self clean feature is not working, it may be because the oven is still too hot from previous use. Leave the oven to cool down for a while then try the self cleaning feature again. If it still doesn’t work, get your oven’s manual and check to make sure that you have set the oven the right way.

How To Self Clean GE Oven

To use the GE oven self clean feature, follow the steps listed below…

Step 1: Open the windows in your kitchen.

Step 2: Take out any mats, trays, and racks in the oven.

Step 3: Turn off the light in your oven an ensure that the light cover is properly positioned.

Step 4: If you have any major food spillage in your oven, scrub it off with a soft sponge and some soap.

Step 5: Press the “Self Clean” button on your oven’s control panel.

Step 7: As soon as the self cleaning cycle is over, do not try opening the door. The door will stay locked till the oven cools down. Once you can open the oven door, get a damp cloth and wipe off all the ash in the oven.

If you would like a video explanation of how to use the GE oven self clean feature, watch the video below.

How Does A GE Oven Self Clean?

GE Oven Won’t Unlock After Self Clean — How To Fix

Step 2: Open the oven door. To do this, get a clothe hanger.

Step 3: Insert the hanger hook in between the stove top and the door.

Step 4: Pull back on the latch using the hook.

Step 5: While doing this, open the door.

Step 6: Take out the screws underneath the stove top using a Philips head screwdriver. If there aren’t any screws, skip this step.

Step 7: Lift the stove top and hold it up with a sturdy piece of wood.

Step 8: Use the Philips screwdriver to take out the screws holding the metal plate to the top of the oven.

Step 9: Set the panel aside and note where each wire goes on the lock motor by taking a picture.

Step 10: Disconnect the wires and take out the two screws at the front of the oven holding the lock motor in place. Do this using the Philips screwdriver.

Step 12: Secure the new lock motor to the oven using the two screws.

Step 13: Connect the wires to the new motor making sure that each one goes to the right place.

Step 14: Return the metal plate and the screws securing it.

Step 15: Lower the stovetop and secure with the screws.

Step 16: Shut the door and plug the oven back in.

To replace a rear mounted lock motor in an oven, do the following…

Step 1: Unplug the oven for safety.

Step 2: Pull the oven away from the wall and unscrew the lower rear access cover. Do this using a Philips screwdriver.

Step 3: Set the panel aside.

Step 4: Note where each wire goes on the lock motor then disconnect them.

Step 5: Test the lock motor using a multimeter. If the multimeter doesn’t show a reading, the motor is faulty. Unscrew the motor from the oven and get a replacement.

Step 6: Lift the motor off the rod. Push the rod forward to unlock the door.

Step 7: Position the new motor on the oven’s rear and secure with the screws.

Step 8: Reconnect the wires to the motor making sure that each one goes to the right place.

Step 9: Return the back panel and secure with the screws.

The video below will show you how to replace a front mounted and rear mounted lock motor in an oven.

GE Self Clean Oven F2 — How To Fix

If your GE oven won’t lock during the self clean cycle, it may be because it has a manual lock. When you close the door, you will see a plastic piece sticking in between the oven door and top burner, turn this latch to the right to lock the door. However, if the door doesn’t have a manual lock, the lock motor is most likely the cause of the problem. Read the “GE Oven Won’t Unlock After Self Clean” section above to replace this component.

GE Oven Stuck On Self Clean — How To Fix

To turn off your GE oven self clean, follow the steps listed below…

Step 1: Locate the “Cancel” or “Clear/Off” button on the oven’s control panel.

Step 2: Press the “Cancel” or “Clear/Off” button once to turn off the self clean feature.

During the self cleaning process of your GE oven, it’s normal for there to be some fumes. The grease and food particles in the oven are being burned to ash, so the oven may smoke. However, note that the fumes emitted by the oven are dangerous to inhale.

If you forgot to remove the racks in your GE oven before starting the self cleaning process, it won’t be damaged as long as they are dark enamel coated. If they aren’t, press the “Clear/Off” pad to end the process, put on some mitts, and take out the racks from the oven.

GE Self Cleaning Oven Latch Broken — How To Fix

To replace the broken door latch in your GE oven, follow the steps listed below…

Step 1: Turn off and unplug the oven for safety.

Step 3: Take out the two screws under the oven cooktop.

Step 4: Lift up the cooktop and have someone else hold it up for you. You could also prop it up with a thick piece of wood.

Step 5: Take out the screws which hold the metal plate at the front of the oven top.

Step 6: Remove the metal plate to gain access to the door latch.

Step 7: Take out the two screws at the front of the oven which hold the door latch in place.

Step 8: Slide out the door latch.

Step 9: Disconnect the wires connected to the door latch and note where they go on the latch.

Step 10: Get a new door latch and connect the wires to it.

Step 11: Reposition the door latch and hold it in place using the two screws.

Step 13: Secure the metal plate with the screws.

Step 14: Lower the oven cooktop and return the screws underneath it which hold it in place.

Watch the video below if you would like a visual of how to replace the door latch in a GE oven step by step. 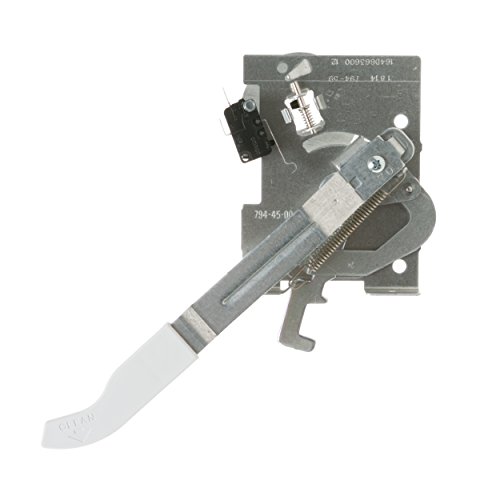 How To Reset A GE Oven [Detailed Guide]

How An Oven Works [Detailed Guide]

How An Oven Heats [Detailed Guide]

How To Calibrate A GE Oven [Detailed Guide]

How To Clean GE Oven Without Self Clean

There are many ways to clean your oven. From store bought oven cleaners to more natural methods like baking soda. Read this article to learn how you can clean your GE oven without having to use the self clean feature.

GE Oven Won’t Turn On After Self Clean

Step 1: Unplug the oven from the outlet or switch off the circuit breaker.

Step 2: Pull out the oven till you get enough space to access the back.

Step 3: Take out the screws on the sides of the oven back. These screws hold the lower and upper back panel in place.

Step 4: Remove the upper and lower back panel and set them aside.

Step 5: You will see the thermal fuse close to the terminals of the oven’s heating element.

Step 6: Disconnect the wires from the thermal fuse.

Step 7: Unscrew the thermal fuse from the back wall of the oven.

Step 8: Get a new thermal fuse and screw it to the oven.

Step 10: Reposition the lower and upper back panel of the oven.

Step 11: Hold the panels in place with the screws.

Step 12: Push the oven back to its former position.

Step 13: Plug the oven back in or turn the circuit breaker on.

Watch the video below for a visual of how to replace the thermal fuse in a GE oven.

The GE oven self clean and steam clean features both have their pros and cons. Below, we have listed them so that you can choose which one you’d rather use.

The Self Clean Feature

The self clean feature is a great way to clean heavy spillovers in an oven. With just a click of a button, the oven turns on and heats up to very high temperatures. This leaves the oven free off grease and bits of food at the end of the process. After the self clean process, there will be ash in the oven. All you have to do is wipe out the ash and your oven will be clean again. But while this is not as time consuming as scrubbing off all the food in your oven, the self clean feature also has its flaws.

During the self clean process you will see some smoke. This smoke the oven emits is harmful to pets and humans. Additionally, the oven’s thermal fuse could get damaged because of how hot it gets during the process. The oven door glass could also weaken because of this. If there were any small cracks existing on the oven door glass before, the extreme heat from the oven could make it explode or shatter. So, the self cleaning process may leave you having to replace two of your oven components.

GE Oven Self Clean How Long?

Depending on how dirty your oven is, the self cleaning cycle of your GE oven could last anywhere from 1 1/2 to 3 hours.

Why Is My GE Oven Making Clicking Noise After Self Clean?

If you hear a clicking noise from your GE oven after the self cleaning cycle, it’s completely normal. The sound you’re hearing is the oven door being unlocked.

Why Does My GE Oven Not Have A Self Clean Button?

If you don’t see a self clean button on your GE oven, it probably doesn’t have the self clean feature.

Will GE Oven Turn Off After Self Clean?

After the self cleaning cycle, your oven should turn off automatically. If your oven doesn’t turn off, there is something wrong.