Kitchenaid Oven Locked After Cleaning — How To Fix

Step 1: Unplug the oven’s power cord from the outlet.

Step 2: Pull the oven away from the wall.

Step 3: Open the oven door. If the door won’t open, get a clothe hanger.

Step 4: Insert the clothe hanger into the gap in between the door and stove top.

Step 5: Pull the door latch back with the hanger hook in order to unlock the door.

Step 6: Take out the two screws at the front of the oven frame which secure the door latch using a Philips head screwdriver.

Step 7: Go to the oven’s rear and take out the two Philips head screws which hold the support bracket of the upper rear panel.

Step 8: Set the bracket aside and take out the screws which hold the oven’s lower rear panel in place.

Step 9: Set the panel aside.

Step 10: Disconnect the wire plug from the door lock.

Step 11: Take out the screw or screws which secure the door lock to the oven.

Step 12: Remove the door lock and get a new one.

Step 13: Get a new door lock and position it in the oven. Make sure the latch protrudes through the other end of the oven.

Step 14: Secure the door lock with the screw or screws.

Step 15: Connect the wire plug to the door lock.

Step 16: Return the oven’s lower back panel and the screws which secure it.

Step 17: Reposition the support bracket and secure it with the two screws.

Step 18: Return the two screws which hold the door latch to the oven’s front frame.

The video below will show you how to replace the door lock in a Kitchenaid range oven.

Below, we have listed the steps you need to follow in order to replace the door lock in a Kitchenaid double wall oven…

Step 1: To avoid the risk of electrocution, switch off the oven’s circuit breaker.

Step 2: Open the door of the faulty oven. If the door won’t open, get a clothe hanger.

Step 3: Insert the clothe hanger in between the oven door and use the hook to pull the door latch back in order to release the door.

Step 4: Take out the four screws which hold the vent in place using a Philips head screwdriver.

Step 5: Remove the vent and set it aside.

Step 6: Using a quarter inch wrench, take out the two screws which hold the door lock in place. The door lock is in the oven opening.

Step 7: Push the door lock back and pull it out.

Step 8: Take a picture of the door lock to note where each wire goes on it.

Step 9: Disconnect the wires and get a new door lock.

Step 10: Connect the wires to the right places on the new door lock.

Step 11: Push the door lock into the oven and hook it on the tab to secure.

Step 12: Return the screws which secure the door lock and tighten them.

Step 14: Secure the vent with the four screws.

Step 16: Switch the circuit breaker back on.

Watch the video below for a visual of how to replace the door lock in a Kitchenaid double wall oven.

Frigidaire Oven Smells [How To Fix]

Frigidaire Oven Smoking [How To Fix]

Kitchenaid Oven Self Clean [How To, Issues & Solutions]

How To Clean A Kitchenaid Oven [Detailed Guide]

How To Use A Kitchenaid Oven [Detailed Guide]

Kitchenaid Oven Locked After Power Outage — How To Fix

If your Kitchenaid oven is locked after a power outage, follow these steps…

Step 1: Locate the circuit breaker for your oven and switch it off.

Step 2: Leave the breaker off for 5 minutes.

Step 3: After 5 minutes, switch the circuit breaker back on.

Step 4: Turn on the oven and press the “Cancel” button.

How To Lock A Kitchenaid Oven Door

To lock the door of your Kitchenaid oven, follow the steps listed below…

Step 1: Look between the door and stove top. You should see something sticking out, this is the door latch.

Step 2: Move the door latch to the right to lock the door.

Step 3: To unlock the door, move the latch to the left.

Kitchenaid Oven Door Locked No Power — How To Fix

Step 1: Get a clothe hanger.

Step 2: Insert the hanger hook into the gap between the door.

Step 3: Using the hook pull back on the latch to unlock the door.

Step 4: While pulling back on the latch, open the door.

Step 1: Switch off the circuit breaker or unplug the power cord.

Step 2: Turn the oven around.

Step 3: Take out the three screws on the right side of the oven which secure the side bracket.

Step 4: Take out the other screws on the left side which secure a bracket as well.

Step 5: Lift the oven’s panel off and set aside.

Step 6: Disconnect the wires connected to the thermal fuse.

Step 8: Get a new thermal fuse and screw it to the oven.

Step 9: Connect the wires to the new thermal fuse.

Step 10: Reposition the oven’s back panel.

Step 11: Return the two side brackets and secure them with the screws.

Step 12: Plug the oven back in and push it to the wall.

Watch the video below for a visual of how to replace the thermal fuse in a Kitchenaid range oven. 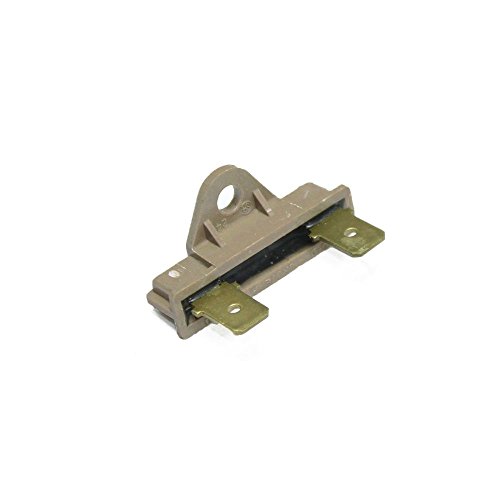 Read this article to replace the thermal fuse in a Kitchenaid double wall oven.

Kitchenaid Oven Control Lock — How To Use