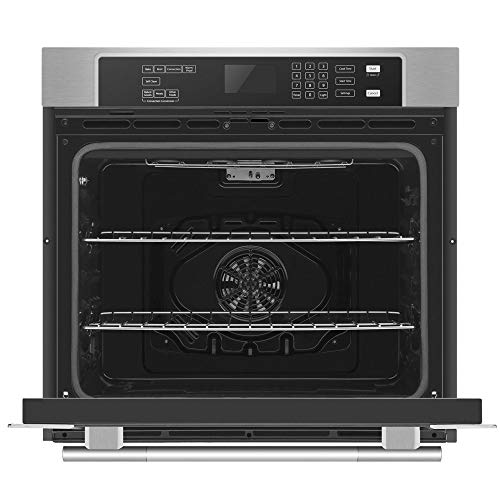 Are you facing some problems with your Neff oven fan that you don’t know how to fix? In this article we will show you the solutions to Neff oven fan problems.

Neff Oven Fan Not Working — How To Fix

If your Neff oven fan isn’t working, either the fan blade or fan motor could be damaged. We will show you how to replace each of these components. To replace a Neff oven fan blade and fan motor, follow the steps listed below…

Step 1: Before you start the repair, make sure that the power to the oven has been turned off.

Step 2: Open the oven door and take out the shelves.

Step 3: Uninstall the appliance from the cabinet by taking out the screws on each side.

Step 4: Lift out the oven and set on a cloth lined surface.

Step 5: If you want, you could remove the oven door to make it easier to access the fan blade in the oven.

Step 6: Take out the screws which hold the back panel of the oven’s interior in place.

Step 7: Once you have remove the back wall panel, you will see the fan blade. Take out the nut in the middle of the fan blade which secures it to the oven.

Step 8: If the hole in the middle of the fan blade is not round, you will need to replace it.

Step 9: Go to the back of the oven and remove the screws holding the outer back panel in place.

Step 10: Set the outer back panel aside.

Step 11: Note where each wire is connected to on the fan motor and disconnect them.

Step 12: Take out the screws holding the fan motor in place. There should be three screws.

Step 13: Turn the fan motor then pull it out.

Step 14: Get a new fan motor and connect the wires to the right terminals.

Step 15: Screw the fan motor to the oven.

Step 16: Align the outer back panel and secure with the screws.

Step 17: If the existing fan blade is faulty, get a new one and screw into place.

Step 18: Return the back wall panel and the screws which secure it.

Step 19: Push the oven back into the cabinet and secure each side with the screws.

Step 21: If you removed the oven door earlier, return it.

Step 22: Close the oven door and turn on the oven’s circuit breaker.

Also follow the steps above if your Neff oven fan is making noise.

The video below will walk you through the process of replacing a Neff oven fan blade and fan motor.

Can You Still Use A Fan Oven If The Fan Is Broken?

It isn’t safe to do so at all. Using a fan oven without the fan will cause it to overheat. This could damage other components in the oven as well as the fan.

When you turn your Neff oven off after cooking, it’s normal for the cooling fan to run for about thirty minutes to prevent the oven from overheating. However if it lasts more than thirty minutes, you should call a technician to identify the problem.

Neff Oven Fan Working But Not Heating Up — How To Fix

There is more than one possible reason for your Neff fan oven not to cook evenly. We have listed each one below and the steps you need to follow to fix it.

If the fan blade or motor in your oven is damaged, your food will be uneven because the fan won’t circulate the heat. Click here to learn how to replace a Neff oven fan blade and motor.

This is another reason your oven would not cook evenly. Look at this article to learn how to replace a faulty heating element in a Neff oven.

This is the last possible reason why your oven isn’t cooking evenly. To replace the temperature sensor in a Neff oven, follow the steps listed below…

Step 1: Turn off the oven’s circuit breaker to avoid the risk of electrocution.

Step 3: To make it easier to replace the temperature sensor remove the door. Flip the hinge locks on the oven door.

Step 4: Lift the oven door off and set on a towel lined surface to prevent it from getting damaged.

Step 5: Remove the racks in the oven.

Step 6: On the upper left corner, you should see the temperature sensor held in place by two screws. Take out the screws.

Step 7: Pull out the temperature sensor. Be careful as you do this so that the wire doesn’t disconnect behind the oven.

Step 9: Get a new temperature sensor and connect the wire to it.

Step 10: Push the sensor back in and hold in place with the two screws.

Step 11: Return the racks to the oven.

Step 14: Close the oven door and turn on the circuit breaker.

Also follow the steps above if your Neff oven is not heating up to the right temperature.

The video below will walk you through the process of replacing the temperature sensor in an oven.

How To Clean A Neff Cooker Hood [Detailed Guide]

Step 1: Turn off the circuit breaker.

Step 2: Uninstall the oven from the cabinet and place on a towel lined surface.

Step 3: Remove the door to make the process easier. Flip the locks on the door hinges then lift the oven door off.

Step 4: Slide out the racks in the oven.

Step 5: On the top back wall of the oven interior, the thermostat rod will be sitting on clips. Unclip the rod from the clips.

Step 6: Take out the screws which secure the back panel and top panels of the oven in place.

Step 7: Set the panels aside.

Step 8: Pull out the thermostat rod (also known as capillary tube) from the oven.

Step 9: There may be a bracket behind the oven holding the thermostat cable in place. If there is, take out the screws which secure it.

Step 10: Take a picture of the thermostat wires to know where each one goes then disconnect them. If two wires are the same color, mark one with a marker.

Step 11: Take out the screws which secure the thermostat.

Step 12: Get a new thermostat and screw it into place.

Step 13: Reconnect the wires to the thermostat.

Step 14: Push the thermostat’s capillary tube back into the oven.

Step 15: Return the bracket  and hold it in place with the screws.

Step 16: Sit the tube back on the clips in the oven interior.

Step 17: Return the top and back panels of the oven and secure them using the screws.

Step 18: Return the oven door and flip the hinge locks to secure it.

Step 19: Reinstall the oven to the cabinet and slide the racks in.

Step 20: Close the oven door and switch the circuit breaker on.

Watch the video below for a visual of how to replace the thermostat in an oven.

Is Circotherm Oven The Same As A Fan Oven?

Do Electric Ovens Have Fans?

Is Neff Slide And Hide A Fan Oven?