There are a few possible reasons why your oven won’t light. In this article, we will talk about each one and show you how to fix them step by step.

Oven Indicator Light Won’t Turn Off — How To Fix

If your oven indicator light won’t turn off, the infinite heat switch might be faulty. To test and replace the heat switch in an oven, follow the steps listed below.

Step 2: Turn the oven around to access the back.

Step 3: Take out the screws which secure the back panel of the oven.

Step 5: Disconnect the wires connected to the infinite switch making sure to note where each one goes.

Step 6: Test the infinite switch using a multimeter. Touch the probes of the multimeter to the two lower terminals of the switch.

Step 7: There shouldn’t be any continuity if the switch is turned off. However, if the multimeter displays a reading from 0 to 1 ohm, the switch is faulty. Get a new one

Step 8: Pull of the control knob in front of the infinite switch.

Step 9: Take out the screws that are now visible.

Step 11: If the rod of the new infinite switch is longer than the old one, snap it to the right length using a pair of pliers.

Step 12: Position the new switch and screw it into the place.

Step 13: Push the control knob back in.

Step 14: Reconnect the wires to the infinite switch.

Step 15: Align the back panel and hold it in place with the screws.

Watch the video below for a visual of how to replace the infinite switch in a oven. 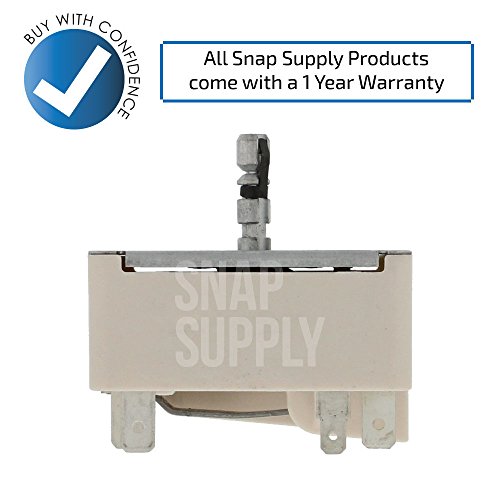 Oven Won’t Light But Burners Do — How To Fix

Dutch Oven Tripod [How To]

How To Clean A Neff Oven [Detailed Guide]

How To Install A Neff Oven [Detailed Guide]

How To Set A Neff Oven Timer/Clock [Detailed Guide]

If your oven light bulb won’t screw in, the bulb is probably the wrong type. Try ordering the same type of bulb as the one that was removed. Also order the bulb from a different manufacturer.

How To Replace The Light In An Oven

To learn how to replace the light bulb in an oven, read this article

Why Won’t My Oven Light Turn Off?

If your oven light won’t turn off, first check that the light switch isn’t on. Some ovens have a switch with which you can switch the oven light on and off. If you have confirmed your oven light isn’t switched on, you should reset the oven. To reset an oven, follow these steps…

Step 1: Turn off the oven and unplug it.