If your Samsung oven only works on broil, this article is for you. We will show you how to fix this problem and other related ones.

Samsung Oven Only Works On Broil — How To Fix

Step 1: If your oven is close to a wall, pull it away to gain access to the back.

Step 2: Unplug the oven’s power cord from the outlet.

Step 3: Take out the screws around the back of the oven which hold its lower rear panel in place.

Step 4: Grip the bottom of the panel and lift it off.

Step 5: Set the panel aside.

Step 7: Test the element for continuity using a multimeter. If there is no continuity, the bake element is faulty.

Step 8: Take out the screws which secure the power cord to the terminal block assembly.

Step 9: Carefully pull out the power cord as the edges of the terminal block are sharp.

Step 10: Using a Philips head screwdriver, take out the screws which hold the terminal block plate to the oven. There should be about three screws.

Step 11: Bend back the tab on the terminal block plate.

Step 13: Slice the insulation around the heating element using a pocket knife.

Step 14: Lift the insulation up a bit and take out the two screws which secure the element. There will one screw close to each terminal.

Step 15: Carefully pull the heating element out and get a new one.

Step 16: Slide the new one into the opening at the back of the oven.

Step 18: Reposition the terminal block metal plate and hold it in place with the screws.

Step 19: Reconnect the wires to the bake element.

Step 20: Pass the power cord through the hole in the metal plate and screw it back to the terminal block.

Step 21: Position the rear panel on the oven by inserting the tabs at the top sides of the panel in the slots.

Step 23: Plug the oven’s power cord back into the outlet.

Step 24: Push the oven back to the wall.

Watch the video below if you would like a visual of how to replace the bake element in a Samsung oven. 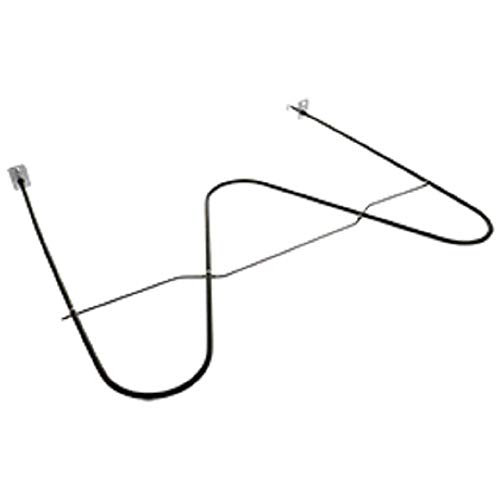 How To Clean A Samsung Oven [Detailed Guide]

How To Dehydrate In A Samsung Oven [Detailed Guide]

How To Calibrate A Samsung Oven [Quick Guide]

How To Unlock A Samsung Oven… [Detailed Guide]

Where Is The Broiler In My Samsung Oven

Open the oven door and look inside. The broil element is on the top wall of the oven’s interior.

Samsung Oven Stuck On Broil — How To Fix

Step 1: Pull the oven away from the wall and unplug the power cord from the outlet.

Step 2: Turn the oven around to gain access to the rear panel.

Step 3: Take out the screws which hold the lower rear panel of the oven in place.

Step 4: Lift the panel off and set it aside.

Step 5: Disconnect the wires from the broil element.

Step 7: Go to the front of the oven and open the door.

Step 8: Flip the locks on the door hinges towards yourself using a flat blade screwdriver.

Step 9: Close the door till it stops.

Step 10: Lift the door up and remove it.

Step 12: Slide out the racks in the oven.

Step 13: Take out the screw which secures the temperature sensor to the back on the oven.

Step 14: Pull out the sensor and disconnect the wire plug.

Step 15: Take out the two screws on the upper back wall of the oven securing the broil element.

Step 16: Take out the other screws at the top of the oven interior.

Step 17: Carefully lower the element down and take it out of the oven.

Step 18: Get a new broil element and position the terminals in the holes at the back of the oven.

Step 20: Return the temperature sensor the oven and connect the wire back to it.

Step 21: Screw the sensor back into place.

Step 23: Position the door hinges back into the slots on each side of the oven.

Step 24: Lower the oven door and flip the hinge locks back.

Step 25: Close the oven door and go to the back of the oven.

Step 26: Reconnect the wires back to the broil element terminals.

Step 27: Reposition the rear panel of the oven.

Step 28: Hold the panel in place using the screws.

Step 29: Plug the oven’s power cord back into the outlet.

Step 30: Push the oven back to the wall.

The video below will give you a visual of how to replace the broil element in a Samsung oven.