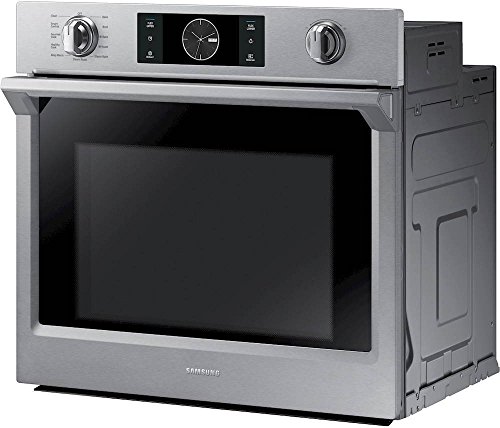 There is more than one possible reason why your Samsung oven has a burning smell. We have listed each one below and what to do about them.

Step 2: Mix some baking soda and vinegar in a bowl to form a paste.

Step 3: Open your oven door and scrape off any loose bits of food in it using a plastic scraper.

Step 4: Wipe out the burnt bits of food using some paper towels.

Step 5: Using a sponge, apply the baking soda mixture in the oven and on the door. Make sure not to apply the paste on the broil or heating element.

Step 6: Close the door of the oven and leave the baking soda to sit for a few hours.

Step 8: After a few hours, open the oven door.

Step 9: Pour some vinegar into a spray bottle.

Step 10: Spray the vinegar on the door and in the oven.

Step 11: Using a soft sponge, scrub the door and the oven interior.

Step 12: Wipe with some paper towels.

Step 13: Spray some water in the oven and wipe with a cloth.

Step 14: If there are any black spots in your oven, get a pumice stone and dip it in some water.

Step 15: Using the pumice stone, scrub off the black spots.

Watch the video below if you would like a visual of how to clean your Samsung oven.

Step 1: Get a large bowl and place the racks inside.

Step 2: Submerge the racks in the hottest water possible.

Step 3: Dissolve a cup of detergent in some water and pour it over the racks.

Step 4: Sprinkle some more detergent on the racks.

Step 6: Afterwards, get a sponge and scrub the racks. The dirt should come off easily.

Step 7: Rinse the racks under some cool water and leave them to dry.

Step 8: Once the racks are dry, return them to the oven.

Step 1: Turn off and unplug the oven’s power cord from the outlet.

Step 2: Pull the oven away from the wall.

Step 3: Remove the screws holding the lower back panel of the oven in place using a Philips head screwdriver.

Step 5: Disconnect the wires from the terminals of the broil element.

Step 6: Test the element for continuity using a multimeter. If there is no continuity, it’s faulty and will need to be replaced.

Step 7: Disconnect the wire plug from the temperature sensor in between the broil element terminals.

Step 8: Go to the front of the oven and take out the racks.

Step 9: Flip the locks on the hinges towards yourself using a flat head screwdriver.

Step 10: Push the door forward till it stops.

Step 11: Lift the door off and set on a towel lined surface.

Step 12: Take out the two screws which secure the temperature sensor on the back wall of the oven.

Step 13: Remove the temperature sensor and take out the other two screws on the back wall of the oven which hold the broil element in place.

Step 14: Take out the other two screws at the top of the oven which secure the element.

Step 15: Remove the element and get a new one.

Step 16: Position the new element in the oven and secure it at the top and back with the two screws.

Step 17: Return the temperature sensor and hold it in place with the screws.

Step 18: Slide the oven racks back in.

Step 19: Insert the door hinges back into the slots in the oven.

Step 20: Lower the door and flip the locks back.

Step 23: Reconnect the wires to the broil element terminals.

Step 24: Connect the wire plug to the temperature sensor.

Step 25: Align the oven’s back panel and hold it in place with the screws.

The video below will give you a visual of how to replace the broil element in a Samsung oven.

How To Preheat A Samsung Oven [& Related Issues Solved]

Samsung Gas Range Will Not Light [Why & How To Fix]

How To Set The Clock On A Samsung Oven [Detailed Guide]

New Samsung Oven Smells Like Burning Plastic — How To Fix

It’s normal if your Samsung oven smells like burning plastic the first time is used. When the oven is turned on, the factory coatings start burning off. This produces smoke and a bad smell. That is why it is recommended to “burn in” your oven before first use. To burn in your oven, follow these steps…

Step 1: Take out the racks in the oven.

Step 2: Close the door and turn the oven on.

Step 3: Press the “Bake” button and set the temperature to 500 degrees F using the arrows or number buttons.

Step 6: Slide the racks back into the oven.

Since gas is sent to the igniter before the oven turns on, it’s okay if your Samsung oven smells like gas when preheating. The smell usually lasts a few minutes and should dissipate soon after. However, if the smell last more than 10 minutes, shut off the gas and open all the windows in your home immediately. There may be a gas leak, so contact your gas supplier.