How To Use A Whirlpool Oven Broiler

Below, we have listed the steps you need to follow in order to use your Whirlpool oven broiler…

Step 2: Open the oven door and place your food on the rack. The rack should be a bit close to the broil element but not too close.

Step 7: After broiling, take out your food from the oven.

Whirlpool Oven Broiler Not Working — How To Fix

Below, we have listed the possible reasons why your Whirlpool oven broiler won’t work and what to do about them.

Step 1: Pull the oven away from the wall.

Step 2: To avoid the risk of electrocution, unplug the oven’s power cord from the outlet.

Step 3: Using a Philips head screwdriver, take out the screws which hold the oven’s upper back panel in place.

Step 4: Set the panel aside and disconnect the wires from the terminals of the broil element.

Step 5: Get a multimeter and turn the dial to the ohms setting.

Step 6: Touch the multimeter probes to the terminals of the broil element. If there is no continuity, the element is faulty and should be replaced.

Step 7: Open the door of the oven and slide out the racks.

Step 8: Take out the Philips head screw on the oven’s upper back wall which holds the broil element in place.

Step 9: Take out the other Philips head screws on the top oven wall as well.

Step 10: Remove the broil element and get a new one.

Step 11: Position the broil element in the oven and return the screws at the top and back which hold it in place.

Step 12: Slide the racks back into the oven.

Step 14: Go to the oven’s rear and reconnect the wires to the terminals of the broil element.

Step 15: Reposition the oven’s back panel and hold it in place with the screws.

Watch the video below for a visual of how to replace a Whirlpool oven broil element. 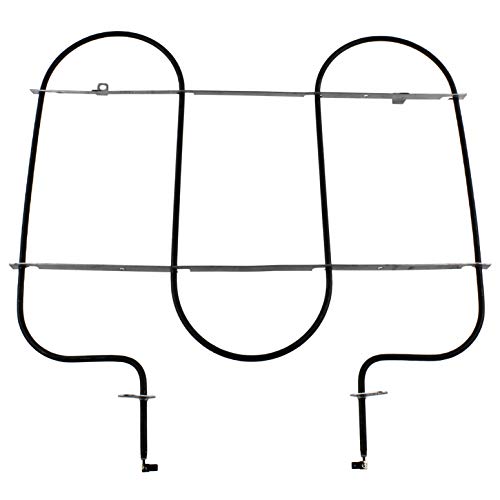 How To Clean A Whirlpool Oven [Detailed Guide]

How To Use A Whirlpool Oven [Detailed Guide]

Whirlpool Oven Racks [How To, Guide]

Whirlpool Oven Broil Works But Not Bake — How To Fix

Where Is My Whirlpool Oven Broiler Element Located?

Your Whirlpool oven broiler element is located at the top of the oven. If you open the door and look inside, you will see the element at the top.