If your GE oven is not heating and you would like to fix it, this article is for you. Today, we will show you how to replace a GE oven heating element and fix other heating problems.

GE Oven Not Heating — How To Fix

There is more than one possible reason why your GE oven won’t heat. Below we will list each one and the steps you need to follow to fix them

Step 1: Ensure that the power to the oven is switched off.

Step 2: Open the door of the oven and flip the hinge locks forward.

Step 3: Lift the door off the oven.

Step 4: Slide out the racks from the oven.

Step 5: Take out the two screws on the back wall of the oven which secure the heating element.

Step 6: Carefully pull the heating element forward till you see some wires.

Step 7: Disconnect the wires from the heating element and leave them hanging out.

Step 8: Get a new heating element and connect the wires to it.

Step 9: Push the heating element back in.

Step 11: Slide the racks back into the oven.

Step 12: Resit the oven door and flip the hinge locks.

The video below will walk you through the process of replacing a GE oven heating element. 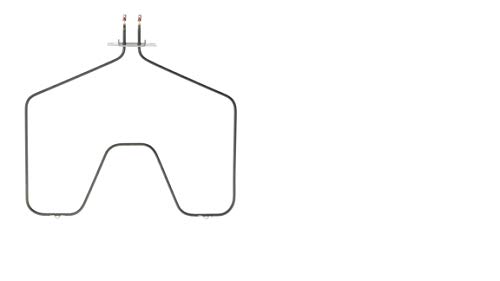 To test and replace the thermostat in a GE oven, follow these steps…

Step 1: As always, unplug your oven.

Step 2: Pull out the knob that is used for adjusting the oven temperature.

Step 3: Take out the screws behind the oven which hold the upper back panel in place.

Step 4: Remove the upper back panel.

Step 5: Take out the two screws which became visible when you pulled out the oven’s control knob.

Step 6: Open the oven door and unclip the thermostat rod from the upper back wall of the oven.

Step 7: Push the rod through the hole in the back of the oven.

Step 8: Note where each wire goes on the thermostat then disconnect them.

Step 9: Using a multimeter, test the thermostat for continuity. If there is no continuity, get a new thermostat. Click here if you would like to know how to test an oven thermostat.

Step 10: Connect the wires to the new thermostat.

Step 11: Hold the thermostat in place using the two screws.

Step 12: Push the thermostat rod into the hole in the oven.

Step 13: Go back to the oven interior and sit the thermostat rod on the clips.

Step 14: Reposition the oven’s upper back panel and secure it with the screws.

Step 15: Push the oven control knob back in.

Step 16: Close the door and plug the oven back in.

The video below will walk you through the process of replacing the thermostat in a GE oven. 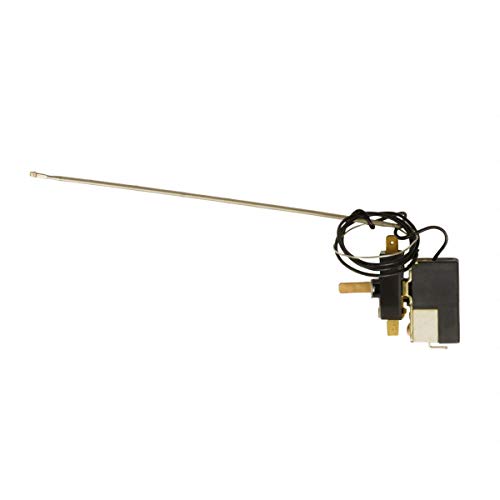 How An Oven Works [Detailed Guide]

How An Oven Heats [Detailed Guide]

GE Oven Self Clean [How To, Problems & Solutions]

Step 2: Take out the screws which hold the upper and lower back panel of the oven in place.

Step 4: Disconnect the wires connected to the thermal fuse.

Step 5: Test the fuse using a multimeter. If there is no continuity, get a new fuse.

Step 6: Take out the screw which secures the fuse to the oven.

Step 7: Screw the new fuse to the oven.

Step 8: Connect the wires to the fuse.

Step 9: Reposition the back panel and hold it in place with the screws.

Watch the video below for a visual of how to replace the thermal fuse in an oven.

GE Oven Heat Coming Out Off The Top

It is normal for the top of your GE oven to heat up if you’ve been baking for a long time. This isn’t a fault, so, you can still use the stovetop.

This issue is probably because of a faulty igniter. To replace the igniter in a GE oven, follow the steps listed below…

Step 1: Unplug the oven or switch off the circuit breaker.

Step 3: Put your hand in the opening and take out the screws which hold the valve shield in place.

Step 5: Loosen the screw which holds the wire cover in place and move the cover out of the way..

Step 6: Disconnect the wires connected to the gas valve.

Step 7: Pull the wire connector of the igniter through the hole and disconnect it.

Step 8: Take out the screws which secure the igniter.

Step 9: Remove the igniter and get a new one.

Step 10: Screw the new igniter into place and reconnect the wire connector.

Step 11: Push the igniter wire connector through the hole in the oven.

Step 12: Reconnect the wires to the gas valve.

Step 13: Reposition the valve cover and tighten the screw to hold it in place.

Step 14: Position the valve shield and hold it in place with the screws.

Step 15: Slide the drawer back in.

Watch the video below if you would like a video of how to replace the igniter in your GE oven.